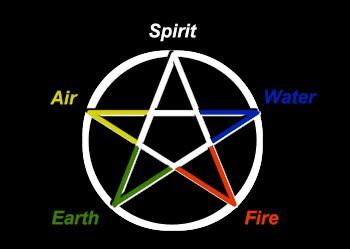 Through the ages, the symbol of the pentagram, or pentacle, has been viewed with great suspicion. It has been seen as a symbol of evil and as a trademark of the Christian Devil and Devil worship. As any Wiccan could tell you, we do not believe in a "Devil" of any form, let alone use a symbol that is supposed to be its "trademark".

The pentagram is often seen as a symbol of Wicca, and Wiccans use it not only for protecting themselves, but also for representing their beliefs. For a Wiccan, there is no symbol more powerful or meaningful than this.

The reversed pentagram is sometimes seen, but rarely used in Wicca. In some covens, it is used as a sign of second degree initiation. Not used to indicate evil, but to fulfill a function of growth. Do not assume when you see an inverted pentagram that the person worships with a Satanic cult. Learn before you judge.

On the pentacle, our sacred symbol, each point of the star represents one element, Air, Fire, Water, and Earth. The top point of the star stands for the fifth element, that of the Spirit. It means centering, transformation, and that its limits are beyond time and space as we understand them. This element is often called "Akasha". The circle around the star represents the endless circle of life we know as Birth, Growth, Death, and Rebirth.

Air — Compass point: East. Represents intellect, communication, knowledge, concentration; the ability to "know" and to understand; to unlock secrets of the dead; to contact the angels; telepathy, memory, and wisdom; the hawk, the raven, and eagle; prophecy; movement, karma, and speed.

Fire — Compass point: South. Stands for energy, purification, courage, the will to dare, creativity; higher self; success and refinement; the arts and transformation; the lion, the phoenix, and the dragon; loyalty and force.

Water — Compass point: West. Associated with intuition, emotions, the inner self, flowing movement, the power to dare and cleanse all things; sympathy and love; reflection; currents and tides of life; the dolphin, the swan, and the crab; dreams and dreamtime.

Earth — Compass point: North. Mystery and growth, fertility, material abundance, the combined forces of nature and its bounty; birth and healing; business, industry, and possessions; the bear, the stag, and the wolf; conservation and nature.