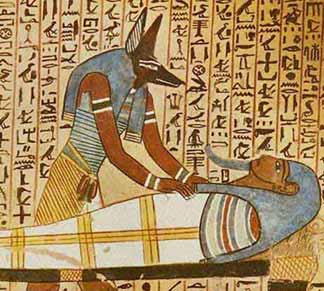 Egyptian God of the Dead & Embalming

Parentage:
He's the son of Nephthys and either Seth or Osiris.

Consorts & Children:
He's the husband of Anput, who's also his female aspect, and father of Kebechet ("cooling water"), goddess of embalming fluid.

Depictions:
His Egyptian name is Inpu, and he's often depicted as a jackal or a man with the head of a jackal.

Notable Stories Involving Him:
In the Book of the Dead, he's depicted as Guardian of the Scales, weighing a soul of the dead against the feather of Ma'at to determine the fate of the soul. As god of the dead, he's often overshadowed by Osiris, and as god of embalming, he helped Isis mummify Osiris after Osiris had been killed by his brother Seth.

Anubis Around the World:
It could be said that his Greek equivalent is Thanatos.